Meet Ishmael Ragin, our student highlight feature for this week!

Ishmael is enrolled in the Phlebotomy Technician program at Boardman Training Center. He began classes in May 2019 to get on the fast track to a rewarding healthcare career.

Before attending BTC, Ishmael went to a larger university and found that it was very big, with a lot of walking around to classes. He had majored in psychology, which is what his mother did, and was following in her footsteps. Ishmael realized that this was not the path for him and became interested in what he could do in the medical field. 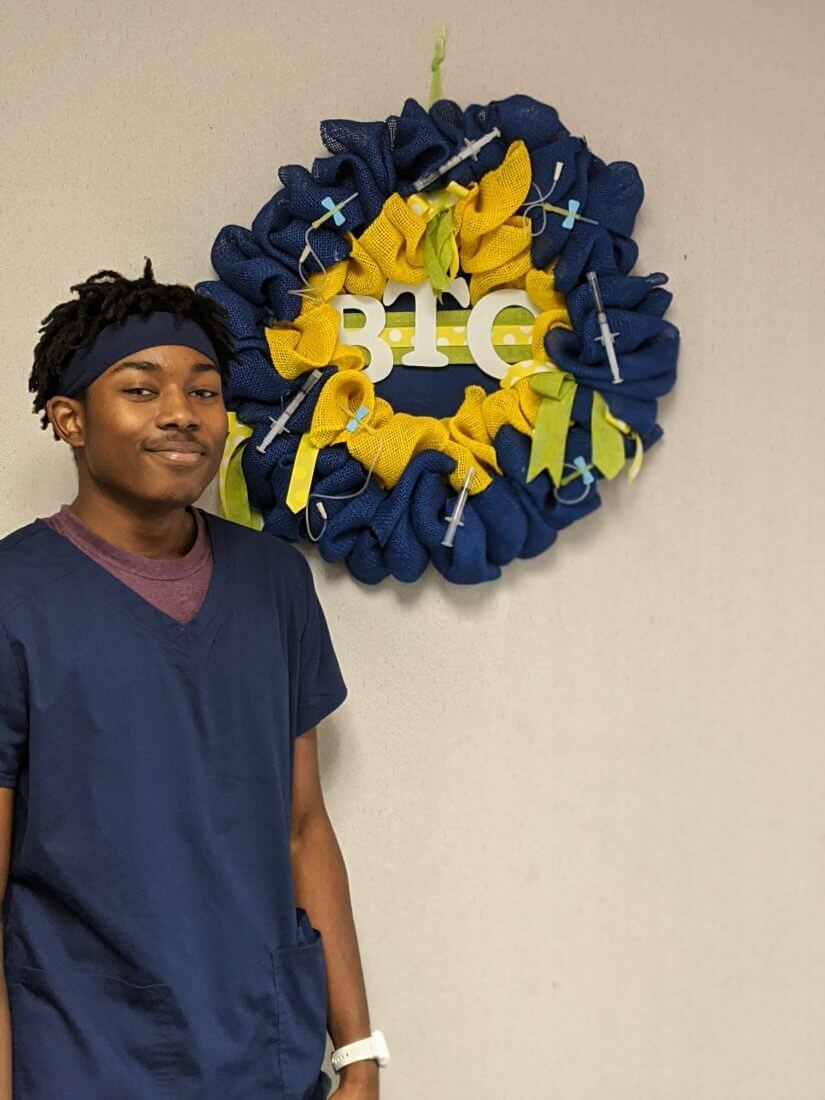 Ishmael also works in the food industry but wants to have a career and not just a job. He says it’s an easy job, but there is only so far you can move up.

When asked why he chose Boardman Training Center to jump-start his healthcare career, Ishmael said it was because of “the location, class sizes, and the field of choice.”

After his experience at a larger university, Ishmael really wanted a smaller school where he could come and learn. He loves the phlebotomy classes because they are hands-on and not straight out of a book.

“It was something I see myself enjoying,” said Ishmael when asked why he chose the Phlebotomy Technician career training program. He wanted to go somewhere that enabled him to gain employment in the local area, because his family is here.

Ishmael says that his favorite parts of attending BTC are “the people, classmates, teachers, and instructors.” He has made a lot of friends in his classes and really gotten to know his instructors.

“Phlebotomy is my favorite class because it’s so hands-on and informative,” said Ishmael. So far in his student experience at BTC, Irene has been his favorite teacher.

When asked where he would like his life to be in five years, Ishmael said he would like to be the highest paid professional in the field. He is interested in potentially going into medical coding eventually. He says he will go as far as he can in his career with the phlebotomy certification.

When asked if he would refer BTC to a friend, Ishmael responded, “Yes. It’s just as informative as a university but has the class size that makes it easier to learn.”

Are you looking for a career training program to get you on the fast track to a rewarding healthcare career? Learn more about our Phlebotomy Technician, EKG Technician, Cardio Phlebotomy, and Medical Office Specialist training programs today. Classes are starting soon, so request information now to get started!

The information on this website was current at the time it was published. It is updated periodically. For the most current information, contact the campus directly. The information presented in this website is general in nature, addressing only highlights and not meant to be complete. Interested individuals should review the school catalog for details.